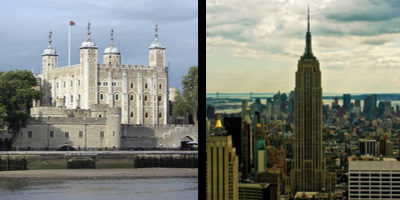 There are 3 rules regarding the comparative and superlative forms of adjectives:

1. For short adjectives (adjectives with 1 syllable) we add -er in the comparative form and -est in the superlative form:

France is smaller than Argentina.
Cheese is cheaper than caviar.
The Tower of London is older than the Empire State Building.

Yesterday was the hottest* day of the year.
The Mississippi is the longest river in America.
Bill Gates is one of the richest men in the world.

* Note that when the last 3 letters of a word are consonant – vowel – consonant in that order, when we add extra letters, the last letter becomes a double:

2. For adjectives which end with y, short and long, we replace the y with –ier in the comparative form and –iest in the superlative form:

Iron is heavier than wood.
He is friendlier than his mother.
She is prettier than her sister.

He is the happiest man I know.
This is the dirtiest room in the house.
You are the luckiest person in the world.

3. For long adjectives (with more than 1 syllable) which don’t end with y, the adjective remains the same and we add more in the comparative and the most in the superlative form:

She is the most beautiful girl I know.
That was the most exciting match of the year.
London is the most interesting city in England.

So there are 3 rules. There are also 3 exceptions:

Back to the Future is the best film I’ve seen.
That was the worst song of the concert.
25 miles is the farthest I’ve run in one day.

Note that we can say:

If we use less, the adjective remains in its original form:

This shop is less cheap than that one.
She is less friendly than her sister.

When two things are the same we use as:

He is as tall as me.
Brad Pitt is as handsome as George Clooney.

Similarily, if we make a negative sentence, we can use as to say two things aren’t the same:

Italy isn’t as cheap as Argentina.
This team isn’t as good as last year’s team.